I'm not sure where this idea came from, now I think about it. A while ago, I was hunting on Ravelry (does anyone else fall in there and get seriously lost...?!) for something else entirely, and I came across this Little Vampire pattern. I bookmarked it, as it wasn't quite the time for spooky stuff, and thought it would be another of the endless things I've saved in my favourites, never to see fruition. 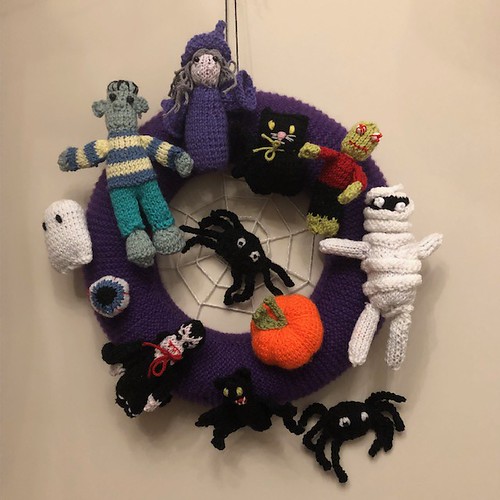 I don't know if it's because I've been working on a woodland wreath (well, I'm actually working on more than one at present) but I guess it means I've had wreaths on the brain. In the depths, a little kernel of (candy) corn of idea was forming and suddenly I'd decided that I was going to make a spooky wreath, for Halloween decor.

Finding myself between projects a few weeks ago, I began searching for some other spooky bits which I could knit up and add to my wreath. It turned out that the lady who designed the vampire also did a pattern called The Little Zombie, so that made the list of course. 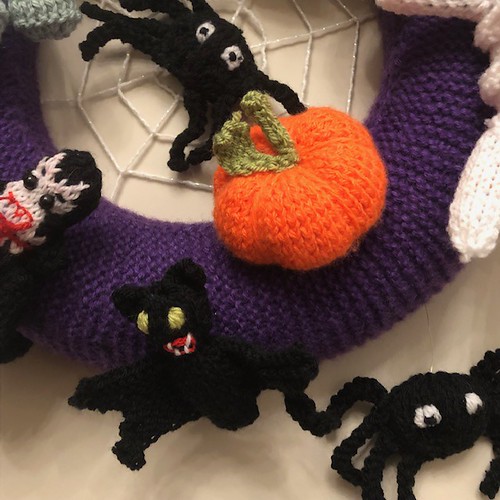 The mummy, pumpkin, bat and spiders came from a magazine pull-out section of Let's Knit magazine for making a Halloween wreath and I used most of their suggestions, except for the skulls and the witch. Then the witch I did use and the Frankenstein's monster both came from a different free halloween pattern from Let's Knit (here).

I bought the polystyrene inner from The Range (they currently have them in the Christmas section for £2) and used a ball of purple mohair which I'd bought from the bargain bin in one of our local charity shops for 50p earlier in the year to create a garter stitch rectangle which was roughly the size of the wreath. I knitted until I ran out of wool and the lucky thing about garter stitch is the stretch it creates, so thankfully it was just about able to fit with enough wool left to stitch it together. 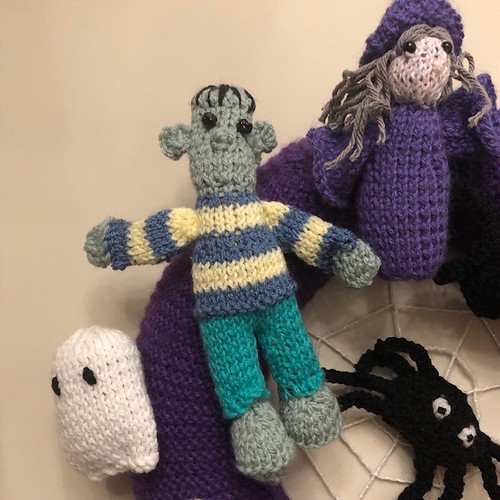 One good thing about this project is that aside from the wreath, everything was made using up things I already had in my sewing room. The critters are all made using scraps of yarn, embroidery thread and beads and everything is stuffed using a box of leftover pieces of yarn from making some pom-poms earlier in the year (mostly because I've run out of fiberfill but they seem to work well!)

I hadn't planned to do the spider web in the middle, but as I was stitching everything onto the wreath, it seemed like a good idea to have one of the spiders hanging from a little wire from the bottom of the wreath and then decided that the other should be on a web. 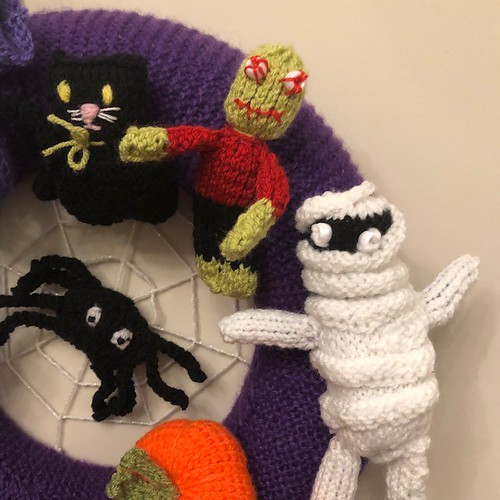 I feel as though it worked out pretty well, considering this was a total experiment, I might add more things to it in time, but it probably looks full enough as it is. I'm not sure where to hang it to start with as I don't think I want it to sit outside all of the time getting rained on, but I can't wait to get it on the door before we have some Halloween visitors next week.